What will bank branches look like in the future?

HomeBankWhat will bank branches look like in the future? 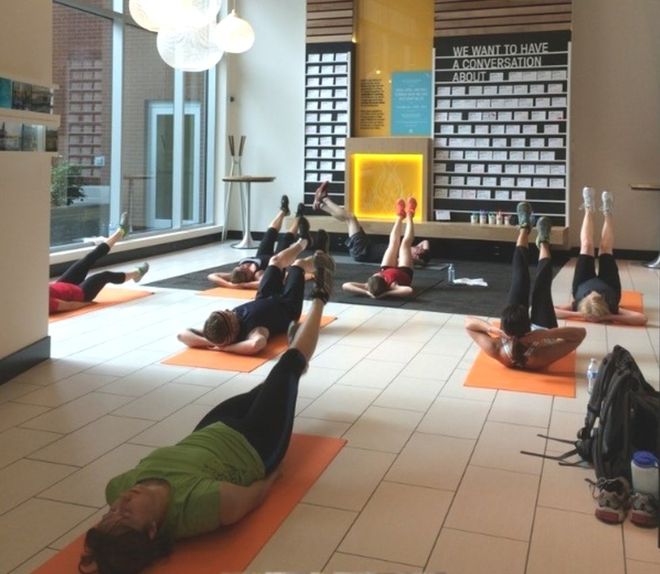 The Royal Bank of Scotland’s chief executive has ruled out any further branch closures for now, arguing that the group’s 800-strong UK network is “about the right size and shape to meet the needs of our customers”. But just what is the right shape for a branch as we move deeper into the digital era?

In a bank branch in Oregon, a small group of people are lying on orange mats, with legs stretched in the air and hands clenched behind their heads.

It is a yoga class, one of a number of innovations introduced by Umpqua Bank to attract the public into their “stores” on the high street.

Its “store-as-community-hub” idea, launched in the mid-1990s, created gathering spots for members of the public to enjoy a free cup of tea or coffee, surf the internet, or stage events such as movie nights.

“The goal then and now was to remove barriers for our customers to talk about their finances, to go beyond the transactional side of banking to those moments where life and money meet.”

The bank has also been increasingly marrying its store concept with digital technology, such as interactive “walls” offering details on new products and services.

It also recently launched a new “human digital banking” app that allows people to choose their own personal banker “devoted to their financial needs”.

British banks have been slower to innovate as they struggle to keep pace with the digital era.

Recent research found that nearly 3,400 branches – more than a third of the UK national network – closed between January 2015 and December 2019 as online and mobile banking surged in popularity.

That transformation in customer behaviour has forced banks to take a closer look at their retail outlets – at least those that are left.

Recent developments suggest that at least some are following an Umpqua-like model in more populated areas.

Virgin Money recently launched a new “store” concept in several British cities which it claims “re-imagines what a bank branch should be”.

Several branches are now offering “a place for entrepreneurs to co-work and create”, as well as a venue for events and concerts.

Other banks are also starting to act more like community hubs, although there’s a suggestion that they haven’t settled on what they think customers want.

In December, a new flagship Bank of Scotland branch opened in Glasgow’s Argyle Street, designed to “act as a testing ground for the future of banking in Scotland”.

Among other things, it offers an in-branch cafe and a free events programme on subjects such as home buying, interior design, running a small business and improving digital skills.

Bank of Scotland managing director Tara Foley says it is “a different kind of bank branch”.

“This will offer the services that we know customers want in a modern and flexible environment, combining the latest in interactive digital technology with the trusted personal service provided by our expert colleagues,” she says.

Some experts believe it is in the banks’ own interests to keep branches open.

In 2018, US management consultants McKinsey and Company argued that branches remained “an essential part of banks’ operations and customer-advisory functions”, adding that bricks-and-mortar locations were “still one of the leading sales channels”.

Despite the growth of digital services, it seems there is still a strong appetite among the public for the personal touch in banking.

Recent research by consumer group Which? suggested 8.4 million UK adults (17%) still preferred to bank at a branch, while seven in 10 consumers used a mix of digital and in-person banking.

TSB chief exec Debbie Crosbie told BBC Scotland recently that her bank was still “very committed” to a branch network, despite plans to close 82 branches in 2020.

“People are doing different things in branches now – they want advice, they want help, ” she said.

RBS, too, has been rethinking its branch model.

The bank says: “We’re investing in our branches to bring them up to date with the way customers bank, using state-of-the art technology, combined with expertise from our staff and a greater focus on community engagement.”

Prof Russel Griggs, who produced an independent review of UK bank closures in 2016, agrees that branches will continue to exist – and evolve.

He says: “I think bank branches will survive as places we go to for advice and learning. That will be a change from where they are today, although many are moving in that direction already.

“That will mean that branch staff will have to have different skills from those they have today as they will be teachers and helpers rather than processors of transactions.”

Eve Callahan, from Umpqua Bank in Oregon, appears confident that branches do have a future.

“They won’t go away completely,” she says.

“There will certainly be fewer of them and they will most likely operate more as centres of financial consultation.

“But they will remain an important part of the overall mix of touch points in the customer journey.”