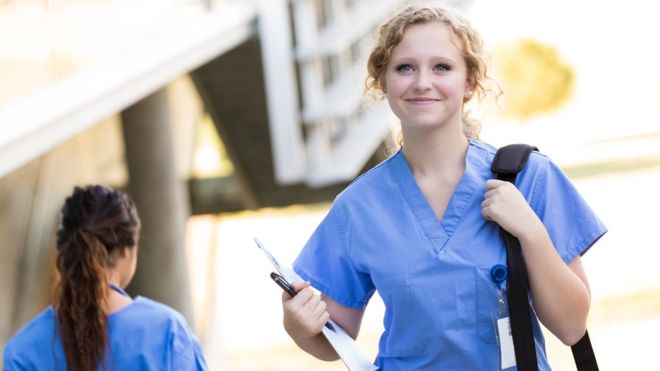 NHS staff are being encouraged to drive to work less and bring in reusable cups and bottles to help the health service tackle climate change.

The suggestions are part of an NHS plan to cut carbon emissions to net zero and reduce air pollution.

Hospitals will also be told to switch to less-polluting anaesthetic gases and reduce emissions from buildings.

The plan follows the launch of Climate Assembly UK this week, which is looking at how the UK can best get to net zero.

The government has committed to the UK reaching the target – where the same volume of greenhouse gases is being emitted as is being absorbed through offsetting techniques like forestry – by 2050.

The NHS employs 1.3 million staff in England. The health and care system in England is responsible for an estimated 4%-5% of the country’s carbon footprint, NHS England said.

Several conditions such as heart disease, stroke and lung cancer have been partly attributed to air pollution. The three conditions are estimated to contribute to around 36,000 deaths in the UK annually.

Sir Simon Stevens, head of the NHS, said: “With almost 700 people dying potentially avoidable deaths due to air pollution every week, we are facing a health emergency as well as a climate emergency.

“Patients and the public rightly want the NHS to deliver for them today, and to help safeguard the future health of our children and grandchildren.”

As part of its plans, the NHS is proposing a new standard contract this year, encouraging staff to cut back on driving to work, for example by walking or cycling, taking public transport or car sharing.

Other suggestions for staff include using refillable water bottles and turning off monitors, printers and photocopiers.

The health service is also establishing an expert panel to advise it on how to reach net zero and by what timescale this can be achieved.

The panel will look at changes the NHS itself can make, including better use of technology to make up to 30 million outpatient appointments “redundant”.

This would spare patients “thousands of unnecessary trips to and from hospital”, it said.

It is estimated some 6.7 billion road miles each year are from patients and their visitors travelling to and from the NHS.

It will also look at changes that can be made in the NHS’s medical devices, consumables and pharmaceutical supply, and moving to more renewable energy.

Dr Helena McKeown, from the British Medical Association, said doctors were becoming “increasingly concerned” about the damaging impact air pollution was having on public health.

She added: “As those tasked with looking after the health of the nation, it is positive to see that our health service is already leading by example by providing environmentally friendly healthcare for patients.”

Dame Donna Kinnair, chief executive and general secretary of the Royal College of Nursing, said its members were already changing practices to help reduce their workplace’s carbon footprint and they were “committed to extending that”.

But Unison general secretary Dave Prentis said the implications for the NHS building stock were “huge”.

“Everyone must now work together to understand how environment-harming heating and lighting systems can be replaced without redirecting funds from patient care,” he added.

The panel will submit an interim report to NHS England in the summer with the final report expected in the autumn.