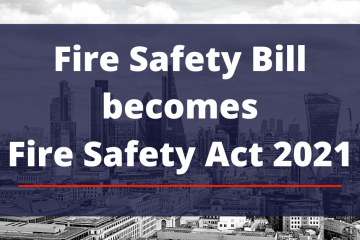 On the 19th March 2020, The Home Office introduced the new Fire Safety Bill, in an effort to improve fire safety in buildings in England and Wales. The Bill has passed through the parliamentary process to become law – The Fire Safety Act 2021.

Following several attempts by Peers in the House of Lords to amend the Fire Safety Bill with a clause prohibiting remediation costs, such as dangerous cladding, fire doors and insulation systems, from being passed on to residents, the Bill took some time to pass through the parliamentary process. The amendments were rejected by the House of Commons five times in total.

The Bill has now received Royal Assent and is an Act of Parliament – The Fire Safety Act 2021.

Set to amend the Fire Safety Order 2005, the Fire Safety Act 2021 (as it is now known) has been designed to “ensure that people feel safe in their homes, and a tragedy like the Grenfell Tower fire never happens again” in England.

The Home Office has set out clarification to who is accountable for reducing the risk of fires – the duty-holder/building owner for multi-occupied, residential buildings. They must manage the risk of fire for:

The fire risk assessment for a building/premises will therefore be required to cover both of these two areas. At a Barbour EHS webinar in March, Matthew Canham from the National Fire Chiefs Council highlighted the Bill is likely to affect around 1.7m residential properties in England and Wales, with a significant impact on workload for fire risk assessors needing access to balconies, doors etc., as well as the overall construction/refurbishment processes.

The Fire Safety Act is also designed to provide a foundation for secondary legislation which won’t require another Act of Parliament, based upon the recommendations made from the Grenfell Tower Inquiry. Extra measures may include responsibility for lift inspections, the reviewing of evacuation plans and fire safety instructions to residents.

It is applicable to England and Wales only.

Want to know more about how the Fire Safety Bill may affect you? Speak to suppliers and experts, and listen to an exclusive webinar on the subject of Making Buildings Safer online at FIREX Connect in June. Book your place for free, here >>

The story so far…

Chair of the National Fire Chiefs Council Roy Wilsher, said: “I am pleased to see the announcement of the new Fire Safety Bill. We have been calling for additional powers since 2017 and these changes should contribute to the public feeling safer in their homes.

In May 2020, the bill received its second reading in parliament. James Brokenshire, Minister of State for Security, noted that the Government was “resolute in its commitment to ensure that Grenfell is never repeated,” and that the expertise of fire risk assessors would be required to comply with the bill, which will apply to all multi-occupied residential buildings.

In September 2020, an amendment to the bill was tabled by the Labour Party, who wanted to see the recommendations from Sir Martin Moore-Bick’s phase one Grenfell inquiry report put into law. The amendments were voted down in the House of Commons by 309 votes to 185, with Felicity Buchan, representing the Kensington constituency (home to the Grenfell Tower), among those who voted against the changes. Conservatives argued that it would delay the implementation of the bill. Supporters of the amendments accused ministers of a “shameful U-turn”, while Grenfell United said that it was “outraged” at the results.

A government spokesperson said: “We are doing everything in our power to implement the phase one recommendations of the Grenfell Inquiry in the most practical, proportionate and effective way to ensure such a tragedy can never happen again. Our proposals go further than the inquiry’s recommendations in many ways, such as inspection requirements on equipment, on information for residents and on external walls. We are now seeking the views of those most affected by the inquiry before deciding on our final approach.”

The Fire Safety Bill held its report stage in the House of Lords for additional debate on Tuesday 17 November 2020. A range of topics were discussed, with the House asking the Government to “think again on the building owner and manager duties, public registers of fire risk assessments and prevention of remediation costs being passed from freeholders to tenants”. The three votes on proposed amendments to the bill included:

No further changes to the wording of the bill were suggested during the third reading, and the bill was passed back to the Commons for the considerations of the Lords amendments.

In his closing remarks to the House of Lords, Lord Stephen Greenhalgh, The Minister of State for the Ministry of Housing, Communities and Local Government, said: “The Bill represents a significant step towards delivering meaningful change so that a tragedy like that at Grenfell Tower can never happen again. The Government are, and always have been, committed to implementing the Grenfell Tower Inquiry phase 1 recommendations. The Fire Safety Bill is the first legislative step in this process, and, as I have stated before, we are committed to delivering the Grenfell recommendations through regulations following the fire safety consultation.

“Although this is a short, technical Bill, it is important to ensure we get the legislative sequencing right. I am therefore committed to delivering this Bill, which will pave the way for the Government to introduce regulations that will deliver on the Grenfell Tower Inquiry phase 1 recommendations. We received 200 responses to our consultation, and I thank everyone who responded.”

The amendments tabled by the House of Lords, alongside the Labour Party and several Conservative backbenchers were defeated on the evening of 24th February 2021. After further debate in the House of Lords, the motion to protect residents from remediation costs of fire safety deficiencies was once again put forward, but was rejected for the second time in the House of Commons on the 22nd March.

The Bill went back to the House of Lords, where peers voted in favour of the amendments once more on 20th April, but this was again voted down in the Commons. The Bill eventually passed through the House of Lords, with attempts to reinsert the changes on 28th April being defeated by 242 votes to 153.